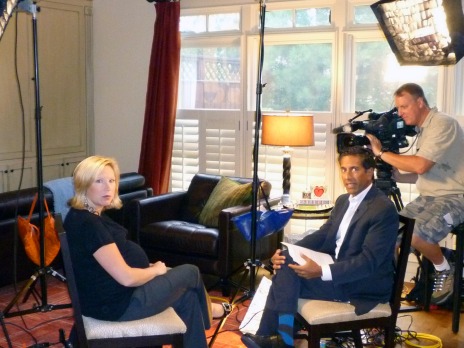 I’m surprised it took this long, yet considering how contemplative he is, I suppose I shouldn’t be.

Paul and I watched the shorter TV CNN segment with Tucker a few times the weekend it aired multiple times. Each time, we watched him with eagle eyes for any appearance of concern, worry or confusion as our own eyes would meet as if to say, so far so good.

He was enamored with watching himself and his brother, our friends and pointing out random things he noticed. Not one comment or question about the content and the message. We weren’t naive and knew it wasn’t a matter of if, but simply a matter of when.

So when he came to me yesterday with:

Hey Mom, I’m confused. Why did they want to film you and us for TV? I don’t understand why.

The million dollar question had finally and naturally risen to the surface.

Where to begin? My mind raced. Where do you begin to explain? How could I simplify it all and have it all make sense to an innocent 8-year-old?

I spoke and pieced the story, our story, together in a manner I felt he could best understand. I asked him as I went, what he understood about what I was saying.

Had he heard the words tumor and cancer and what did they mean to him?

What did he understand about recovery, stability, optimism and hope?

I asked, probably too many times if he understood and if he was ok.

I asked, probably too many times if he was upset by anything I had shared.

I asked, probably too many times if he had questions.

I was 100% honest and yet, I questioned the entire time if I was going about this all wrong.

I couldn’t help but wonder if I had just broken down the unscathed innocent walls of an eight year old and left him wounded in some form.

While he appeared under my intense eyes and ears microscope to be unaffected, I can’t help but worry.

This is the inevitable part of the journey. Sharing with our children a story that began when they were too young to comprehend and will continue to unfold and be told as they grow older and wiser. It is not easy.

These inevitable moments of sharing break my heart and leave me far more wounded than any tumor or surgery could leave me. This is the part of the journey where I say that it’s just not fair and not fair for them. I hate that they are affected by default and the innocent bystanders of my brain tumor.

Yet, maybe I should follow the basic sage wisdom that we tell them. Life isn’t fair and it’s a concept they’ll have to accept and embrace sooner rather than later. Life isn’t fair, move on Jen.

We can’t live in the shadow of fear and Paul and I will do our best to lead our children in an open dialogue as they grow older. Nothing will be easy, but much in life is not. The questions will come and the answers will follow with honesty and grace.

We wish the answers to the questions to come all held messages ears want to hear. However, in the end, truth is the best medicine and all that’s painful is not bad.

I'm Jennifer. A "young" forty something wife, mother, daughter, photographer, family chef, laundry goddess, chauffeur, gardener, survivor of life, advocate and patient. I write this blog to chronicle our lives and our journey with my brain tumor. A tumor I've lovingly and respectfully named, "piece of shit".

What I Write Aboout

These are my words, not yours... use your manners and don't copy.

Grey Matter Life by Jennifer Giliberto is licensed under a Creative Commons Attribution-NonCommercial-NoDerivs 3.0 United States License.
Based on a work at greymatterlife.com.